Protecting the Public and Justice for Victims

On Wednesday I was very pleased to speak in the Opposition Day Debate titled ‘Protecting the Public and Justice for Victims’.

As part of my contribution I was keen to highlight the incredible work being done in the area to deliver justice for the community as a whole, and in particular those who are involved with the Online Watch Link (OWL). It is a fantastic example of how the community can support one another and help bring perpetrators to justice.

I also wanted to speak about how we can tackle the increasing issue of catalytic converter thefts. This is an issue affecting people all over the country with Ruislip, Northwood and Pinner being no exception. I have sadly heard many stories from constituents who have been affected. I suggested that the Government bring used car parts within the remit of the laws on scrap metal, making it much harder for criminals to sell on these parts.

During the Minister’s response at the end of the debate I was very pleased to hear that this was something that he was going to take forward with Ministerial colleagues. I have written to him to follow up on this and offer my support in trying to make these important changes. You can read my full letter below. 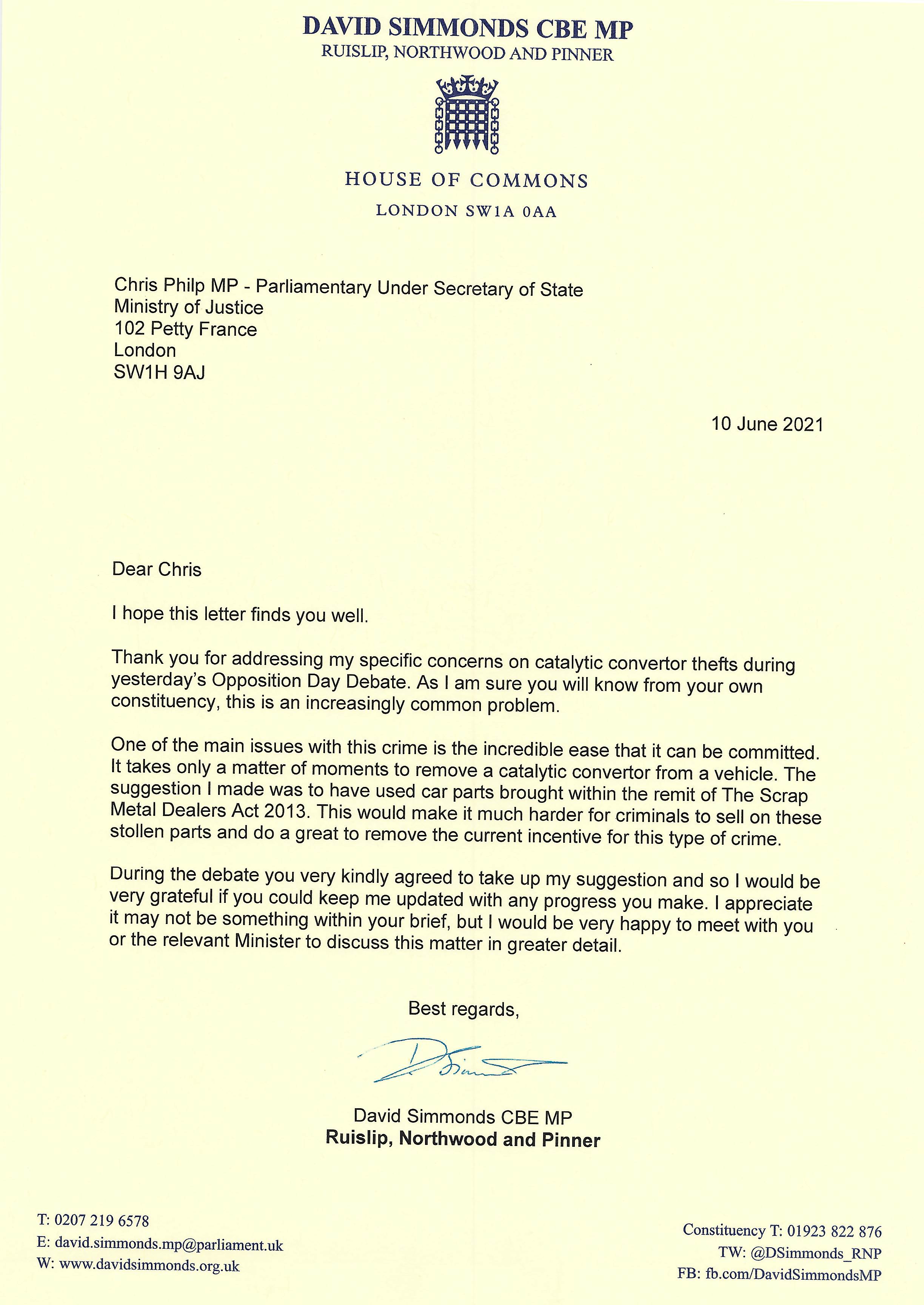 This has been an interesting debate. Clearly all our constituents’ lives have been hugely impacted by lockdown, but one thing that, I am sure, has struck us all is how communities have stepped up to support each other—that is true in respect of justice, as it is in respect of healthcare and social care.

I particularly draw attention to the work done through a project called OWL—the Online Watch Link. It brings together the Neighbourhood Watch CCTV cameras across my constituency and many other parts of England to support our local police services in producing evidence quickly and effectively, so that perpetrators of crime can be quickly apprehended and that there is then sufficient evidence to charge and convict them in the courts.

I have been particularly impressed at how, during this lockdown period, more members of the community—in my constituency and elsewhere—have been signing up to support the project. It has been instrumental in bringing literally thousands of charges, securing convictions for offences from burglary to some sexual offences and many offences involving theft and car crime. The more that we as citizens can support each other, the better, but it is also important that as a Government and Parliament we recognise that it is not just the criminal justice system itself but the communities that we are elected to serve that can support each other in bringing perpetrators before the law.

In due course, I would like to seek consideration from the Government about what more can be done to address the issue of the theft of catalytic converters from vehicles. That has blighted many dozens of my constituents and people across England. Perhaps the Government could bring used car parts within the remit of the laws on scrap metal so that we can ensure that those who steal and deal in those parts, causing great inconvenience and cost to people, can be brought to justice more effectively.

Finally, I express my strong support for the work being done on how we improve justice for young people; I am thinking in particular of secure schools. Having served as a magistrate, I am well aware of the frustration that many in the justice system feel about a lack of sentencing options that give young people a chance to turn their lives around when they have fallen within the remit of the justice system. It is welcome that the Government are bringing forward these proposals to give us a real chance, based on evidence from overseas and the Taylor review of 2016, of helping young people to turn their lives around.