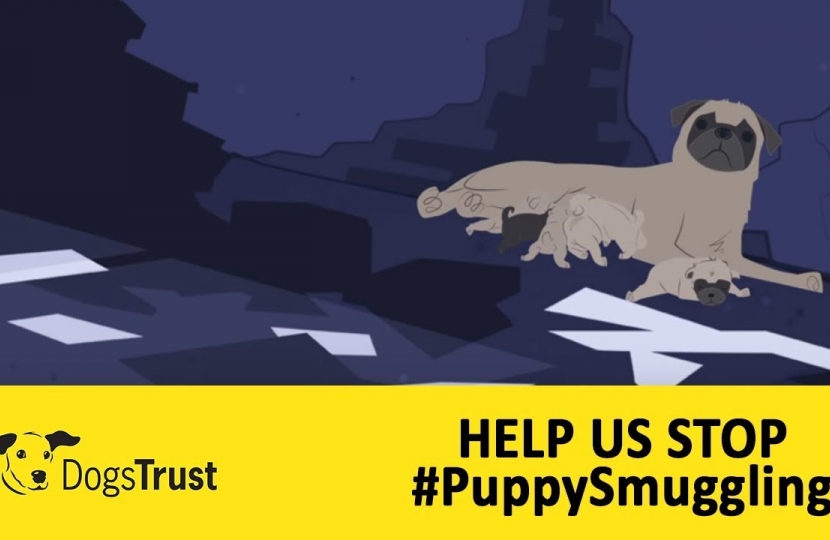 I recently joined colleagues in signing a cross-party letter on behalf of the Dogs Trust Puppy Smuggling Taskforce to the Rt Hon Lord Zac Goldsmith (Minister of State at the Department for Environment, Food & Rural Affairs), calling on the Government to take urgent action against the illegal dog imports into the UK.

I know that many residents are invested in this issue and I am pleased to report that a positive response has been received by the Minister, indicating his support to end puppy smuggling. This reply from Lord Goldsmith follows the publication of DEFRA’s Action Plan for Animal Welfare, which can be found here.

Over the past six years, I know that Dogs Trust have been calling on the Government to crack down on the cruel puppy smuggling trade, and so I am delighted to join them in welcoming the commitment to tackle the problem in the Government’s action plan.

The Government has also pledged to:

The Action Plan also includes measures to deal with other issues that affect dog welfare, including:

My colleagues and I see this as a huge step in the right direction, and these measures have the potential to be a very significant milestone in dog and wider animal welfare. Of course, more work needs to be done and so I will support the work of Dogs Trust and other animal welfare charities in helping it all happen.

The response from Lord Goldsmith can be read below.

I receive a lot of correspondence about various animal welfare issues and know that, quite understandably, these are of paramount importance to residents across Ruislip, Northwood and Pinner.

Yesterday I was very fortunate to be called by the Speaker during PMQs, only the second time since being elected.