Standing Against Animal Cruelty with Battersea 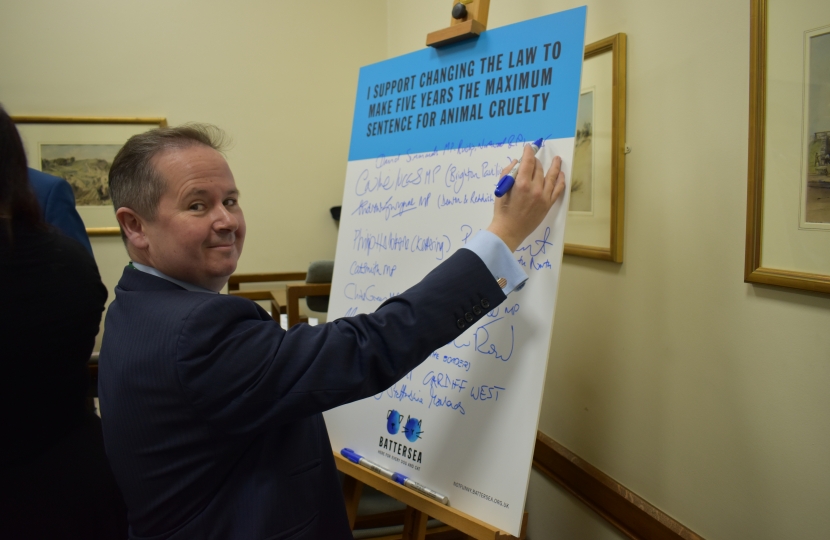 I was pleased to attend Battersea’s reception in Parliament this week to show my support for changing the law to increase the maximum sentences for animal cruelty.

Currently, Courts in England and Wales can only punish the most serious animal cruelty offences with a maximum of up to six months in prison, a banning order and an unlimited fine.

Last week, the measure returned to Parliament, following the introduction of a new Bill to change the law, allowing for sentences to increase a maximum of five years for animal cruelty offences – something that Battersea has fervently campaigned on since 2017.

I am pleased that the Government has already indicated its intention to support the Bill during its passage through Parliament. This change would provide the justice system with the flexibility to treat the most shocking acts of animal cruelty much more seriously that it currently can.

Sadly, Battersea sees these shocking cases of animal cruelty all too regularly. That is why, at their reception this week, I added my signature to a pledge board to underline my support for the change to the legislation. It is important that we change the law to better protect animals in the future and I am proud to support this Bill and Battersea’s campaign.

I receive a lot of correspondence about various animal welfare issues and know that, quite understandably, these are of paramount importance to residents across Ruislip, Northwood and Pinner.